We are going to talk about the Difference Between Ice Cream and Gelato here. When we talk about frozen foods, the first thing that comes into our mind is Ice cream. We all know about ice cream and its flavors but don’t know its origin and its difference with other desserts. Now many of us knows about Gelato and Ice creams but not know about their differences. Ice-cream and Gelato are two different words with different compositions, backgrounds, and origin. They have many similarities and differences between them. Ice Cream is classified as a frozen food with a big history that starts with Persia 500BC. Greeks, Chinese, Romans, Mughals, Europeans and so many other Empires and Countries started making this product soon after Persians. Ice-cream has different flavors which varies from one shop to other shop, One Country to other Country, One Continent to other and so on. Every country has its own flavors for this product. On the other hand, when we talk about Gelato, it is also a frozen dessert with different flavors and tastes. It belongs to Italian origin. In Italy, you can find uncountable flavors of Gelato.

Ice Cream is a popular Frozen food having a variety of flavors and tastes around the world. Nowadays, Ice Cream is common product which is available in every General Store. The history of Ice creams started from Persia. Persians started this product at about 500 BC. Other than Persians, Greeks, Chinese, Romans, Mughals, Europeans and so many other Empires and Countries also showed their interest in this Frozen Food and they started making it with their own methods. But finally, after having different regional names, methods, and shapes this product ended with a specific name which is common nowadays “Ice Cream”. When we talk about its composition and method of its preparation, there are different answers to this single question. It is made of different natural fruits, vegetables, artificial flavors, dairy products, egg yolks. After making a custard type product, it is then sent for freezing under very low temperatures. There are different types of machines used to make ice cream. 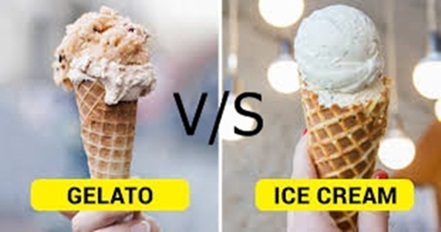 Gelato is a frozen dessert that is very popular in many countries. It has a big history which started with Italians. Italy has big market shares of Gelato. In Italy, there are 5,000 Ice creams parlors. Gelato is less fatty as compared to Ice cream. It has many flavors with respect to its composition. In order to make Gelato, different fruits, artificial flavors are used. After preparing from fruits, it is then frozen at 5oC. It is made with the help of different machines.

Difference Between Ice Cream and Gelato