Difference Between SHO And Inspector In Pakistan is being explained here in the table form.

SHO is the position in Pakistan normally notified through the official buzz by the DPO office. SHO known as Station house officer and his rank is BS 16. He is responsible for all activities in the specific police station. An inspector can be a SHO and the criterion of the post is defined at DPO level. DPO is answerable for appointment of SHO in this aspect. SHO can show involvement in investigating specific crime within the jurisdiction. Any unlawful activity in the area directly involves the SHO as accountable. He is responsible and being asked by the higher authorities for law and order situation within area. All police officers or sub ordinates directly doing their duties under the SHO rank. Both Inspector or sub inspector can be served as SHO.

The rank of inspector is same BS 16 according to the national Police academy ranks for police officers. An inspector can be given responsibility to be stay updated about the police station activities against the unlawful activities in that area. It is highest rank among the junior ranks of Pakistan police. Inspector is only responsible for his activities and decisions within the defined rules. Police reforms are maintaining ranks of inspector and SHO as per the defined way.

Difference Between SHO And Inspector In Pakistan 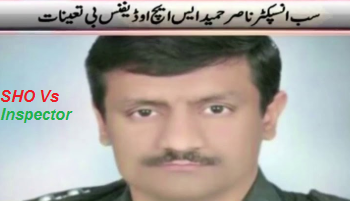 Difference Between Civil And Criminal Law In Pakistan

In reality, there is minute difference between SHO and inspector indeed.