DNA stands for DeoxyriboNucleic Acid. The structure of DNA is a double stranded molecule which consists of a long chain of Nucleotide s. It is made up of Deoxyribose sugar with Phosphate backbone (however, scientists have founded some DNA in which Arsenic substitutes for Phosphorus) consisting of bases Adenine, Thymine, Cytosine and Guanine.  It carries the genetic information of the body. In human body, DNA is responsible for storing and transferring Genetic Information. It transmits genetic information in making other Cells and Organisms.

RNA stands for RiboNucleic Acid. It is a single stranded molecule (however double stranded RNA are also founded in some viruses) containing sugar ribose with Phosphate backbone containing bases Adenine, Uracil, Cytosine and Guanine. It is synthesized from DNA on as per need basis. It directly codes for Amino Acids and acts as a messenger between DNA and Ribosome in the synthesis of Proteins. RNA has a simple structure. It is needed in order for DNA to function. It is found in Prokaryotes (which precede eukaryotes). 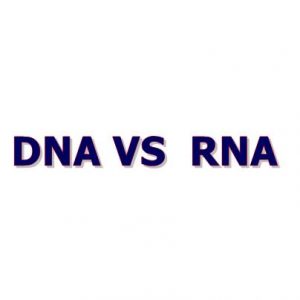 What are the Main Differences Between DNA and RNA