A judge or a magistrate is the two most important terms in the jurisdiction of Pakistan. A judge is referred to the person authorized by a public officer to hear and decides the cases in the court of law whereas the magistrate refers to the person having fewer authorities and power as compared to judge. A judge also refers to the person who presides over court proceeding either alone of a panel of judges which is depending on jurisdiction. Normally the judges handle the complex cases such as criminal cases, high priority cases, federal cases, constitutional cases.  Judges have also higher powers to exercise law enforcement powers. Here below we are going to describe the difference between judges and magistrate in detail. Keep reading this article till the end will surely help you in this regard.

Difference Between Judge And Magistrate In Pakistan

A magistrate is a person referred to the civil officer who administers the law, especially who conducts a court and deals with minor offenses and hold a preliminary hearing for serious ones. A magistrate has less or limited power as compared to judges in Pakistan. 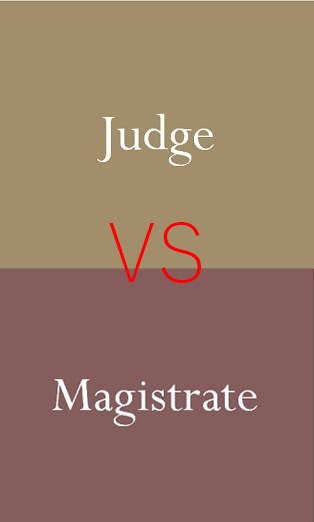 They are assigning to solve less complicated and less important cases in the court of law. The magistrates normally handle lower criminal cases, misdemeanor cases or other minor cases assigned to them. Magistrates can also be appointed by the judges in the court cases. There is a huge difference between judge and magistrate with respect to their powers, authority, and nature of work and duties. For additional detail information must read the key difference between judge and magistrate in Pakistan.

Check out Difference Between High Court and Supreme Court In Pakistan

Difference Between Judge And Magistrate In Pakistan:

Here are the following points from which we can easily or clearly differentiate between judge and magistrate in Pakistan.